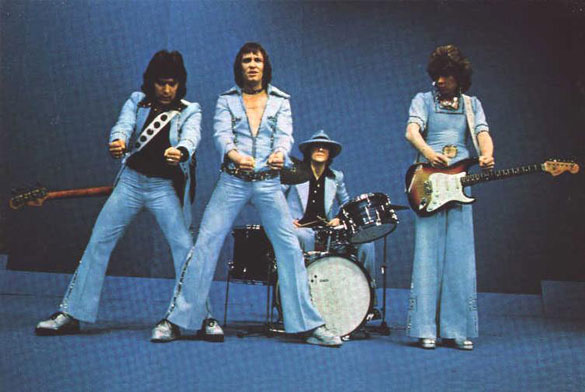 Between 1973 and 1976 Mud were hardly ever out of the UK charts, notching up eleven top ten hits, including three number ones (Tiger Feet, Lonely This Christmas, and Oh Boy). But to find out more about the band behind the hits, we must take a trip to 1960s Surrey...

Rob, Ray, Dave and Les all grew up in and around Mitcham and Carshalton, Surrey, England. It was around 1962 when Rob and Dave first played together in a band called THE APACHES.

They continued to work together for the next few years in bands such as THE BARRACUDAS and REMAINDER and when Remainder needed to find a new bass player, in stepped Ray Stiles, whose father worked with Rob.

Meanwhile, Les Gray was cultivating his liking for trad jazz playing trumpet in his own band, THE MOURNERS which included is younger brother Pete on drums. But gradually the Mourners began to play more and more rock and roll, until there came a day when they needed a lead guitarist - and in stepped Rob Davis.

And for a year Les and Rob in the Mourners and Ray and Dave in Remainder were Mitcham’s top rival bands. In early 1966 the Mourners changed their name to MUD. Later that year their bass player (Nigel Lunt) left and was replaced by Ray Stiles.

In 1967 Mud won a national contest “Search for Sound” which led to them signing to Pye Records. Their first single “Flower Power/You’e My Mother” (both written by Rob) was released in October 1967, promoted by a European tour.

In 1968 the boys had to decide whether to become professional or not. Les, Rob and Ray were in favour, but Pete decided to leave to pursue a career as a draughtsman so left the band. Dave Mount was brought in to replace him. 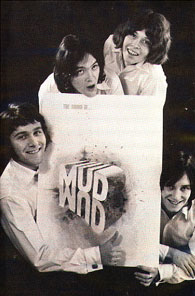 The line up was now complete, and the boys played their first professional gig on 31st March 1968 at the Marquee Club, where they became a regular attraction, supporting acts such as Terry Reid.

In February 1969 Mud provided the backing for Linda Kendrick’s single “I Will See You There”. Linda was one of the stars of the hit musical Hair. Mud also appeared on radio and live appreances with her.

On Friday, March 22, 1968 Mud released their second single “Up The Airey Mountain / Latter Days”. Again, both songs were written by. It was produced by Mike Smith and the A-side was arranged by Keith Mansfield.

On Friday, May 9, 1969 Mud released their third single “Shangri-La / House On The Hill”. By this time Mud had made thirty radio appearances, recently been to Germany to record a TV Show and done a tour of Sweden.

Mud’s fourth single, Ldquo;Jumping Jehosaphat / Won’t Let It Go” was released on Friday, June 26, 1970. Although the single received a lot of airplay and got the name MUD known for a little while, the record failed to make the top thirty.

By now MUD had been professional for three years and had still failed to make the big time. It was a frustrating time for the band, but they continued gigging all over the country. Then, in late 1972, they got the break they so desperately needed.

Songwriter/Producer team Nicky Chinn and Mike Chapman, who had already had success with the SWEET, were looking for a new band to write for and manage. Les, Ray, Dave and Rob leaped at the opportunity and signed a contract with RAK records. They were given a new imaged, new suits and a new song - “Crazy”. The single was released in January 1973 and got to number 12 in the UK charts. MUD had made it at last!

In later interviews it was revealed that the band themselves did not play on either of these two singles (or their b-sides), providing just the vocals. The tracks were actually recorded by sessions musicians, one of which was Pip Williams who would become the bands producer. 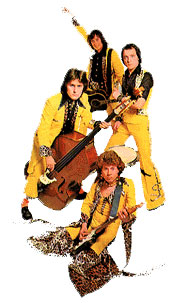 “Crazy” and their next record “Hypnosis” were both based on a tango beat. MUD admit that they weren’t too keen on the idea at first and it was touch and go whether they would catch on.

In October 1973 the image changed with the introduction of teddy-boy gear and a rock and roll sound. Their third RAK single “Dynamite” reached number 4 in the charts. The new look and sound caught on and MUD were quickly becoming one of the hottest new bands around.

In May 1974 “The Cat Crept In” got to number two, followed by “Rocket” in August which reached number six. At this time MUD also released their first album “Mud Rock”.

By now MUD had become regular guests on BBC’s Top Of The Pops and other music shows of the time. They continued to tour extensively throughout the UK and Europe.

Their second number one single came in December 1974 when “Lonely This Christmas” shot to the top of the charts. The single stayed at the number one slot for four weeks. Their appearance on the Top Of The Pops Christmas special is almost legendary, with stage hands climbing step ladders to pour imitation snow on the band as they sang. Anyone who has seen the clip will also note Les’ use of a ventriloquist dummy during the spoken part. As Les told a recent TV interviewer, miming the singing parts was relatively easy, but miming to a spoken part was almost impossible, so he didn’t try!

MUD’s next single, “The Secrets That You Keep”, was released on 14th February 1975 and reached number three in the UK. During March and April MUD were on the road in the UK, Ireland and East Germany and Belgium, where they were voted Number One Pop Attraction. MUD came up against censorship laws for the first time in East Germany where the authorities banned Rob’s costume because he was showing too much bare chest!

On 20th May 1975 the GTO film “You’re Never Too Young To Rock” was released. The film featured MUD, alongside the Rubettes and the Glitter Band. The film itself was not particularly well received - the music was, as you’d expect, good, but the plot and acting are best described as poor, even from the professionals. (Official DVD release: 8/10/12 - order your copy from Amazon)

MUD’s last number one single, “Oh Boy” was released in April 1975, at about which time MUD’s split with Chinn and Chapman and RAK became common knowledge. On 14th June, RAK released “Moonshine Sally”, which had been recorded several years earlier but kept ‘in the can’. It reached number 10 in the charts. 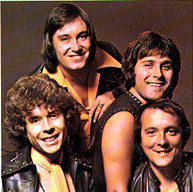 This marked the band’s split with RAK and Chinn & Chapman and they went into the studio in July to start work on their own songs for their new label, Private Stock. The boys announced that ex-Candlewick Green keyboard player ANDY BALL was to join the band on stage and in the studio.

In September, RAK released “Mud’s Greatest Hits”, while MUD released their first single for Private Stock, “L’L’Lucy”. The new single was written by Rob Davis and Ray Stiles and did well, reaching number 10 in the charts, proving that the boys could make it on their own.

“Show Me You’re a Woman”, their next single, entered the charts just as “L’L’Lucy” left. It reached number 8.

Their third album “Use Your Imagination” was released at the beginning of December. The album contained six of their own songs, showing Rob and Ray’s diverse song writing talents. 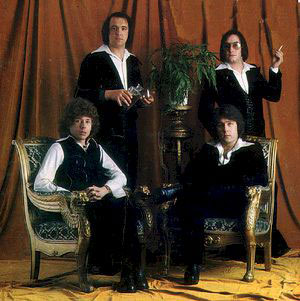 MUD continued to have minor chart successes during 1976 - the disco inspired “Shake It Down” (May) and the more basic rocker “Nite on The Tiles” (October). Their biggest hit of the year - and their last top ten single -was an excellent cover of the Bill Withers song “Lean On Me”, which reached number 7 in November.

The ‘glam’ period was by now well and truly over. Like many of their contemporaries MUD found themselves out of favour with the younger audience who were by now more interested in the disco beat or the upcoming new sound - punk rock.

MUD were once again in the studio during 1976 and released their fourth album, “It’s Better Than Working”, in November. Produced by Pip Williams (producer of Status Quo’s Rocking All Over The World), the album contained all new songs and introduced a very different sound from any of their previous recordings. The album also featured Ray Stiles on lead vocal for two of the tracks.

In 1977 Les Gray signed to Warner Brothers as a solo artists, releasing his own version of the Mindbenders’ “Groovy Kind Of Love” in March.

1977 also saw MUD change labels again, this time signing to RCA. Several singles followed, along with two further albums, “Mud Rock On” and “As You Like It”.

The last single to make any kind of impact was “Cut Across Shorty” released in March 1978. Although it was not a great chart success, it did get a lot of airplay and secured the band some of their last TV appearances.

Andy Ball left the band in 1978 and was replaced by Brian Tatum.

When their contract with RCA ended in 1978 Les left the band and appeared in Jack Good’s “Oh Boy” show and TV series.

Rob and Ray worked together under the name of ROLY, releasing two singles for Logo Records in 1978. I have no other information about this project. 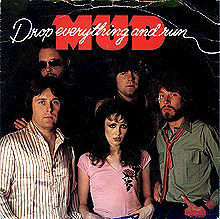 In 1979 MUD released their last single “Drop Everything And Run” on Carrere Records, which featured female vocalist Margo Buchanan. A further single, “Rico” was released in 1980 with Margo on vocals but this time under the name Ring.

Neither of these singles charted, so in early 1980 Mud finally called it a day.

After releasing several solo singles, including a tribute to Elvis Preseley under the name Tulsa McLean, Les Gray assembled a new version of MUD in the early 1980s. For a short time Dave Mount and Rob Davis worked with the band, but eventually went their own ways.

Les Gray’s Mud continued to tour throughout Europe until Les’ illness forced them off the road in 2003. Les died on Saturday 21st February 2004 in hospital in Portugal, after suffering two heart attacks.

After working with Rob in Roly, Ray Stiles went on to release one single with a group called Foton (Bamboo Curtain) before joining the Hollies, who he continues to record and tour with.

Dave Mount left the music business entirely in the early 1980s. He continued to live and work in London with his family until his untimely death on 3rd December 2006.

During the 1980/90s (not sure of the exact dates) the “new” MUD re-recorded all the old RAK hits for a CD that was sold at concert. The CD also featured a new song “When Holy Rocks”.

BBC Radio 2 broadcast a two hour special about Niky Chinn and Mike Chapman that inevitably included MUD. As a bonus the presenters had a copy of the original 16-track recording of The Secrets That You Keep which they played and discussed.

MUD have featured in several retrospectives of the 1970s broadcast on the BBC. Both Les and Rob were featured being interviewed for the “I Love 1974” programme which went out at the end of the summer 2000. The guys also featured in another retrospective which showed their mid-70s “Green Cross Code” advert which also features on the compilation video “Charlie Says”.

Rob and Dave were involved in an ITV show “Bring Back The Christmas No 1.” The programme was hosted by Justin Lee Collins who managed to bring together a host of 1970’s stars to record a new Christmas single. The final song was written by Rob and the recording featured people such as Dave Mount, David Essex, Dave Hill, Don Powell, Jona Lewie, Dave Bartrum and Trevor Oaks. The single was never released but was available briefly for download.

With thanks to John Warburg for additional information