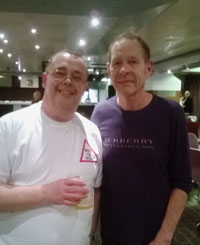 At the end of 2015 Ray Stiles and Rob Davis reunited to play three shows as Mud.