With thanks to:
Barry Dunning for signing the cheques
Phil Beryl Bowdrey for getting it all together
Dave Hammy Hulme and John Reg Vahey for unlimited electronic and technical know how
Steve Ronnie Rayment for devotion to duty
Gerry Geggs Hope for a zillion cups of tea and coffee

Extra thanks:
Trev the tea, Pete De Silva, Keith the car, Greg the wipe, Tony the tape, Cathy the inspiration

MUD’s second album for Private Stock, It’s Better Than Working, was recorded at a number of sessions around the UK between March and September 1976. Taking over production was former Jimmy James guitarist Pip Williams. Although he is better known as the producer of some of Status Quo’s post ’76 albums, during the 1970s he also worked with Phil Wainman and Chinn and Chapman, playing on the first Sweet and MUD singles.

A change of producer brought a change of style. With one exception, It’s Better Than Working has a much lighter and funkier feel than their previous three releases. The album also featured Ray Stiles on lead vocals for two of the albums 11 tracks - “It Don’t Mean A Thing” and “All I’ve Got To Give”.

The production and writing are smooth and accomplished, but the album lacks the sense of fun that had become MUDs trademark. It is also the only MUD album not to feature any covers of ’60s hits.

That aside, It’s Better Than Working is an excellent album, with a good mix of moods and sounds. Andy Ball is still there on Keyboards, joined by Pip Williams on electric sitar (“Sweet and Sour Lady”) and Pete Wingfield on piano.

Probably the most intriguing track is “Beating Round The Bush” which features an “Air powered, abrasive percussion chamber designed, built and programmed” by Pete Tattersall at Strawberry Studios in Manchester. “Breathing” is credited to Christine Hope!

The album contains only one all-out rocker - “Nite On The Tiles” - which was the first of two tracks to be issued as singles.

Although it is not their best album, It’s Better Than Working, with its cleaner production and funkier sound is as good a pop album as your are likely to find.

Highlights: SWEET AND SOUR LADY and BEATING ROUND THE BUSH
Lows: Lack of fun. 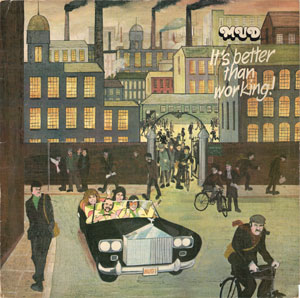 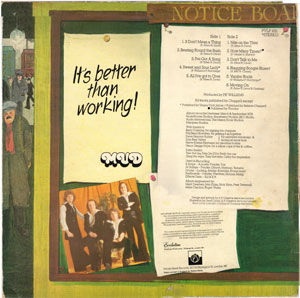